Foreclosures Are Down, But Are The “Boomerang Buyers” Back?

Foreclosures Are Down, But Are The “Boomerang Buyers” Back? 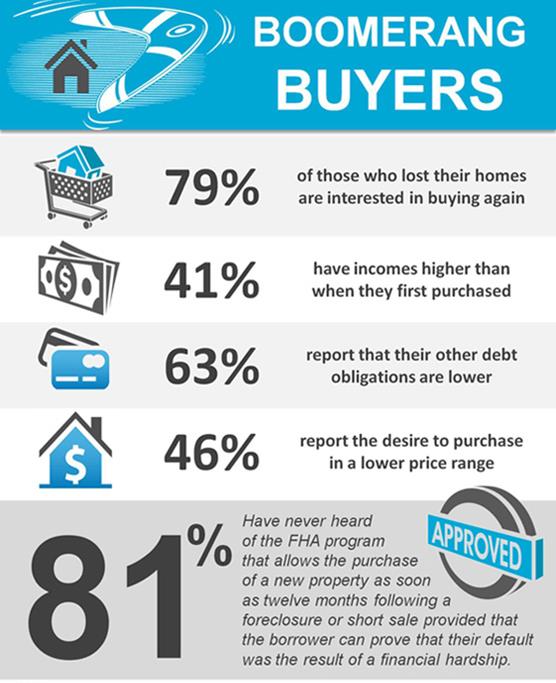 Seven years after the “Great Recession” foreclosures are way down, and buyers recovering from a home loss may be a boon for the market.

Most of us know that after a major personal financial hardship like bankruptcy or foreclosure, the timeline for the negative mark on your credit score to disappear is seven years.  We’ve now hit the seven year anniversary of the Great Recession, and since about 7 million people lost their homes in the crash, there’s a lot of interest in whether or not these potential ‘Boomerang Buyers” might be ready to come back into the market.

The National Association of Realtors is reporting that  950,000 formerly distressed homeowners have become re-eligible for mortgages and have “likely” purchased homes already.  They believe that another 1.5 million will re-enter the market over the next five years.

It’s important to remember that even though the seven year mark is a big milestone in restoring credit and the ability to obtain a mortgage, it’s not the same for every case.  Many of these buyers may have been eligible much sooner.   According to FICO, even though a foreclosure is a very negative event for your score, it can actually rebound in much less than 7 years.  If a buyer has kept up all their other credit obligations, their FICO score can recover in as little as 2 years!   Homeowners who didn’t foreclose, but who sold in a short sale rather also have a shorter time frame for loan eligibility.

The FHA has helped the return of boomerang buyers by relaxing the guidelines for their Back to Work program – designed to help homeowners that have “experienced periods of financial difficulty due to extenuating circumstances”.  Under the program, qualified buyers can be eligible for a loan in as little as 12 months after a foreclosure or short sale.

Foreclosures overall have been dropping dramatically since they peaked 5 years back, in September 2010.  They’re actually down a massive 68 percent now, from 117,225 nationwide to 38,000 as of July, according to the National Foreclosure Report, released this week by Core Logic.

Since the beginning of the recession, there were about 5.8 million completed foreclosures nationwide, but that number has slowed dramatically.  Now, national foreclosure inventory is down almost 28 percent – meaning that it’s only 1.2 percent of all homes with a mortgage.  That’s the lowest number since December of 2007!

Any reduction in the number of foreclosures is clearly a good sign for both the Real Estate market, and the economy overall.  Gains in the job market and rising home values have helped to bring foreclosures to their current lows, and with less foreclosure inventory, we should see home prices improve further.

Look, the number of potential boomerang buyers may be higher or lower than the NAR’s 1.5 million number.  These buyers may not all be ready to to buy again yet.  There may be more people who are still in the earlier steps of recovery from a more recent hardship.  This has all played out over a long timeline.  But the FHA program has helped, and enough time has passed for many of these buyers that they are going to be a factor.   We can be certain that there are a lot of them, that most are interested in getting back in the market, that they’re better off than they have been for a while, and that it’s good news for all of us.

Whether you’ve been through a foreclosure yourself and are ready to buy again, have questions about how the drop in foreclosures might affect your home’s selling value, or need help finding those rare short sale deals that might still be out there, we can help you!  Contact us for any of your Real Estate needs.